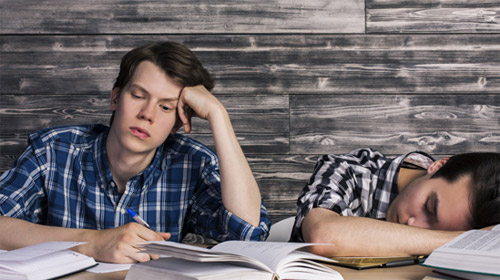 Do you want to improve your concentration, memory and grades? Would you like to be healthier and happier? Maybe more sleep is what you need!

As a group, teenagers are notorious for not getting enough shut-eye. Health experts say teenagers should be getting at least 9 hours sleep each night but extensive research into teenage sleep patterns shows young people only manage a measly 6 hours on average.

So why do so many teenagers fail to get the sleep they need?

There are many factors that can affect a teenager’s sleep pattern, such as:

However, the most common thing that prevents us from getting the sleep we need is our beloved smartphone.

Why are phones and tablets such a problem at bedtime?

Using devices such as smartphones and tablets in the last hour before bedtime is known to reduce the hours of sleep people get. A study carried out by the University of Oxford shows that in 73% of cases, smartphone usage led to people being more tired.

So, before you settle down for a pre-sleep Instagram or Snapchat session, remember that your levels of melatonin (that’s the clever little hormone that controls your sleep patterns)will be suppressed by around 22% after you use a backlit screen for two hours. Which makes it harder to sleep when you turn out the lights.

So what issues can this cause for teenagers?

Instead of focusing on the negatives, here at Unstoppable Teen we like to focus on positives… so here are five seriously good reasons for switching off your phone and becoming a super-sleeper.

As a teen, sleeping for more than 7.7 hours per night will improve your metabolic system, which means you will burn fat quicker – hurrah! Your body will also be better at regulating the levels of glucose in your system, which reduces your risk of diabetes. How cool is that?!

2) You’ll have more energy when you wake up

Just being a teenager takes a tremendous output of energy. There’s a lot of growth constantly taking place in your mind and body, after all. One of the best ways to boost your energy levels is through sleep, not those pesky energy drinks.

It’s when you are asleep that most of your physical growth and brain development takes place. If you don’t get enough sleep your growth and development can slow down, and you can end up feeling tired throughout the following day.

3) Sleep helps you to succeed in school

Concentration, memory, mathematical ability and logic are all compromised by lack of sleep. Researchers found that by getting one extra hour of sleep every night enabled students to achieve higher grades, not to mention behaving better in lessons.

In other words, the quality of your sleep affects the quality of your grades. Late nights and a lack of sleep is a recipe for disaster in school. So if you want good grades, you need to make it a priority to get to bed and get some shut-eye. We think this is as important as doing your homework.

4) Your problem solving abilities will increase

Adequate sleep and rest have a direct impact on your creativity, decision-making and ability to think outside the box while solving problems.

Scientists have found that a small nightly decrease in sleep has serious cumulative effects on our thinking abilities. They discovered that after 10 consecutive days of getting only 6 hours sleep per night (rather than 7 to 9), your brain function experiences the same level of impairment as if you’d been awake for the previous 24-hours straight. That’s a recipe for disaster!

Feeling cranky? Sleep deprivation has been linked with higher levels of depression, anxiety and even ADD (Attention Deficit Disorder). Constantly feeling exhausted also makes you more likely to feel irritable and less sociable. Studies have shown that this is due to increased levels of the stress hormone cortisol in the body, which can leave you feeling stressed and in a bad mood for prolonged periods of time.

So there you have it… a sleeping teen is not just a happy teen, but you’re also more likely to be healthier and achieving higher grades too! With all this overwhelming evidence in mind, we want to encourage you to make it a priority to get 9 hours of sleep every night.

How do you ensure you get enough sleep? Please share your sleep advice below.