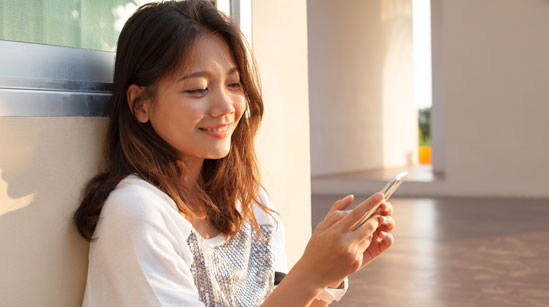 Sharing naughty pictures with your mates or sending one of yourself to someone you’re flirting with might seem like a cheeky way of getting their attention, but do you know the real consequences of these actions?

Sexting is where a sexually explicit photograph or video is sent by one person to another. These images can be of a single person or more than one person. They almost always involve partial or whole nudity, and they often show people performing acts of a sexual nature.

Sexts are often sent by phone, but can also be sent via any computer or device that’s connected to the Internet or a mobile phone network.

How common is sexting?

With 6 out of 10 teenagers reporting that they’ve been asked for explicit photographs or videos, sexting is becoming a worrying trend amongst young people. These messages can at first seem like a bit of fun, but the long-term consequences of one message can be truly devastating.

We couldn’t believe the horror stories

We’ve heard all kinds of horror stories about teenagers who sent sext messages and later found their images plastered all over the Internet.

One of the worst cases we heard was of a teenage boy who received sexts from his girlfriend and two years later received a criminal conviction for being in possession of indecent images of children. That young man is now on the sex offenders register and will find it very difficult to ever get a good job.

Sadly, these types of traumatic (and completely avoidable) experiences are happening to thousands of teenagers every day.

Where does it all go wrong?

Let’s say you send a picture, perhaps over What App or Snap chat, to another person you know. That photograph is now stored on their phone and they can now do whatever they want with your picture. You no longer have any control whatsoever over who sees it or what they do with it.

Sure, you might be in love at the time you send the image, but will it always be that way?

The moment you send a sext, you lose control of that image and your reputation.

Let’s imagine a stranger asks you to send them a sexual photograph online. This is very dangerous and can lead you to a lot of trouble. How do you know that person is who they say they are? How do you know what their intentions are with your photograph or video?

If somebody you’ve never met asks you to send a pornographic photograph, you should always remember that not everyone is trustworthy. Quite often, sex offenders will target young people online, or sometimes people will ask for sexts to blackmail you with.

There are many websites where photographs and videos of a sexual nature can be stored without the owner’s knowledge at all, which is a very scary thought.

Although sending a sext is your decision, sharing a photo of a sexual nature is against the law and at least one sexting-related case is reported to the Police in the UK every day. In fact, it is a very serious criminal offence to take or store explicit photographs of anyone who is under the age of 18.

How to avoid any problems with sexting: